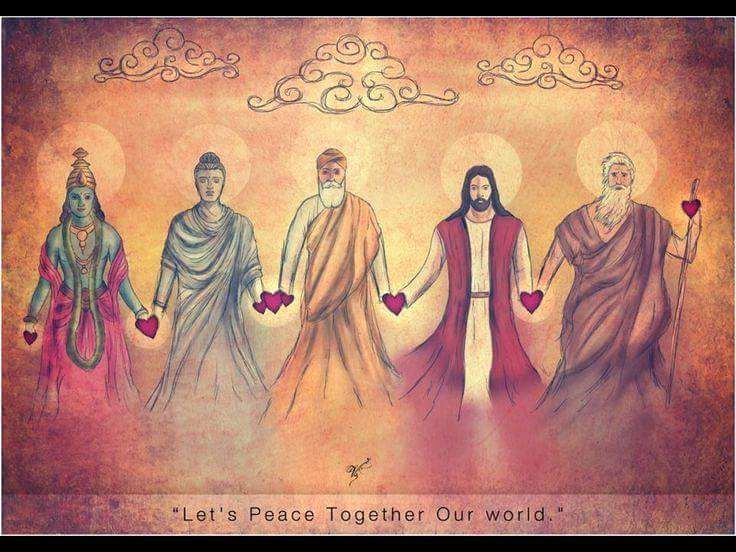 Buddhism uses an analogy to describe what happens when we follow fixed beliefs to contour reality for us.  Buddhists say that holding such views is like gazing at the sky through a straw.  The sky is the unobstructed truth of who we are and what our lives are about.  When a received belief system circumscribes that for us, it is as if we are looking at the truth through a narrow tube, seeing only a very small part of it while convinced we are seeing the whole.  When we’re attached to our beliefs, we can spend a lot of time comparing straws: ‘I’ve got a better straw than you. It’s a little wider and it’s got a design on it.’  Especially in the face of fear, we tend to hold on to our straws with a death grip.” -Sharon Salberg “Faith: Trusting Your Own Deepest Experience”

Christian, Jew, Muslim, shaman, Zoroastrian, stone, ground, mountain, river, each has a secret way of being with the mystery, unique and not to be judged.” – Rumi, Sufi poet

A few years ago, I read Sharon Salzberg’s book “Faith: Trusting Your Own Deepest Experiences,” wherein she made the analogy of how beliefs, be they from a Tradition, religious or not, or heritage, are like straws that we use to look at the sky.  In this Buddhist analogy, the sky “is the unobstructed truth of who we are and what our lives are about.”

For many of us, we have a straw, that we use to look at but a narrow part of the sky, and for some maybe, we use this special straw we have to condemn the straw others are looking through from a place of arrogance and tunnel-vision.

Nonetheless, the point is that we all have straws, there are many straws, and there is even a way to sit back and not have a straw at all.

A former friend of mine once said this about these straws we have:

Sometimes the sky is too broad and you need a filter, but as you age, the filter becomes thinner and you draw your eye back from the straw so that you see all of the sky, not just the focused narrow view of what is in the straw.”

Basically, it’s okay to want a straw or even need one, but in time we can lessen the grip on our straw, let it go, and take a look at the sky above us in all its mystical, profound, mysterious, beautiful, and glorious existence!

He went on to say, “Structure your base belief, but allow yourself to see other views as having value.”

Hence my dilemma, impasse, obstacle, etc.  I love Jesus, most days, and believe in the Christian narrative, to a small extent, but I find myself aligning more and more with what Chris Martin of Coldplay called an “All-theist” perspective and Unitarian Universalists beliefs and principles, that there’s truth everywhere and one religion’s take is just that, a perspective, a straw!

I resonate with what Muslim scholar and writer Naeem Abdullah writes in “Islam: A Favor to Humanity,”

The world today is fast becoming one. Humanity is one, God is one, and mankind are all part of one human family. All religions are connected, and they all lead to faith in the one God. No matter what name we give him he is but one God.”

In my theoretical leanings as a counselor, and as a thinker in general, I’m highly Postmodern and Constructivist, and in being so, along with my mystical, spiritual approach to life, love, religion, and Scriptures (be it the Bible or Quran), I want to do things like:

-Pray the Rosary with Catholics

-Pray at a mosque with my Muslims brothers and sisters

-Learn meditation/mindfulness from a Buddhist monk

-Talk about the universe with Taoist

-Recite the Dhikr with Muslim Sufis

-Pick the brain of a shaman of the Native American variety

-Listen to the Torah in a synagogue

-Live non-violently like the Anabaptists and Jains of Jainism

-Learn about “the good life” from Pagans

-To engage with and learn the spiritual/mystical teachings of all

-Generally, open my mind and heart to the views of others

Back to my dilemma! Orthodox Christianity (not to be confused with Eastern Orthodoxy) isn’t down with the vast majority of things I just listed, so I feel I can’t make it home permanently because of my convictions, beliefs, and experiences with faith being so much more than the acceptance of a set of dogmatic beliefs. I’m too “unpigeonholeable” so to speak; too Constructivist and Postmodern to limit myself to just one straw.

I’ve finally found and can admit that I can’t believe in any God who demands we “believe the right things” about Him/Her/It or else we are damned to some unredeemed corner of said God’s universe where we die and burn for ever and ever.

This sort of Theology Proper reeks of arrogance in the “Eye of Reason,” which is but one way we come to know God! God can’t be grasped by the mind or reason alone nor by simple theological presuppositions the mind concocts either on its own or by “rational deductions” of Scripture, etc.  Accepting a set of theological presuppositions is not the same as believing in God and having faith.

To “believe rightly,” is to only know God or the Divine through one’s mind, which is full of Ego! It is the mind and Ego that tells us we can know God and what God wants us to believe or else we parish.

I refuse to believe that “believing the right things” is what faith and religion are all about! I can no longer except that line of thinking!

I believe, in the end, it isn’t about believing the “right things” about God, but being in “right pursuit” of God, which includes and incorporates all religious and spiritual ideologies of the Divine.

God can’t be found inside our minds, but God can be found and known within our hearts.

My problem with Jesus is that He commands “proper belief” of the mind or “Eye of Reason,” and commands that His followers proselytize in His name from the stance of “believing the right things.”

I can’t reconcile that with the values I have that God can be found by “right pursuit” over “right belief!” If someone rightly pursuing God, the Divine, etc. can be rejected by Jesus, if He is God, because said person didn’t “believe rightly” about Jesus then, what kind of God is Jesus? How can Jesus be inclusive and such? He can’t be! What is merciful about that? Nothing!

I can’t reconcile that command from Christ and the Christian belief of proselytizing with the values I have such as multiculturalism, interfaith belief, work, and ecumenism, inclusivity, diversity, pluralism, and the Unitarian Universalist principles I’ve accepted.

If God can’t be bigger than Christianity’s boxes then I’m not sure I can believe in God, especially God in the form of Jesus.

Yes, I’m a fan of Jesus and some parts of the Christian narrative, but I’m also willing to put down that straw, learn how others view things through their own straws, and hopefully one day, I’ll be able to lay aside all straws! Christianity isn’t the only teaching, the only mystical narrative! It isn’t the only straw! I can’t believe that it is, or that it is the most supreme of the straws through which we see.

As Naeem said in the quote above, we are all human. What unites us all is not religion, belief, or dogma, but the simple fact and truth that who we are and what we are here for lies in the sky to which we all look!

All that being said, I’m not a Christian, but a Unitarian Universalist or All-Theist!  I reject Jesus’ command to proselytize in His name based on “right belief!”  I reject any theology that demands “right belief” about God!

We all share flesh and blood along with a desire to know what the sky is all about. We should all be able to question the faith we have in our own straws, to doubt them, wrestle with them, maybe reject them, be willing to entertain the views other straws offer, and maybe, just maybe, one day, somehow, let go of our straw, lie down in the grass, do nothing, and gaze upon the vastness that is above us, which is our universe, our home, our lives, our planet, our existence, our being, and our Truth.

The Story is in the sky; let’s lay aside our straws!

“I can’t imagine that the God of the universe is limited to our ideas of God. I can’t imagine that God doesn’t reveal God’s self in countless ways outside of the symbol system of Christianity. In a way, I need a God who is bigger and more nimble and mysterious than what I could understand and contrive. Otherwise, it can feel like I am worshipping nothing more than my own ability to under the Divine.”

“We have to change us

Whatever God you believe in

We all come from the same One

Strip away the fear

Underneath it’s all the same love

About time that we raised up!” -Macklemore

“Love is my religion!”  -Ziggy Marley

One thought on “The Story Is In The Sky: Let’s Lay Aside Our Straws (Revised and Updated)”