“Is not this the [worship] that I choose: to lose the bonds of wickedness, to undo the straps of the yoke, to let the oppressed go free, and to break every yoke? Is it not to share your bread with the hungry and bring the homeless poor into your house; when you see the naked, to cover him, and not to hide yourself from your own flesh? Then shall your light break forth like the dawn, and your healing shall spring up speedily; your righteousness shall go before you; the glory of the Lord shall be your rear guard.”

As with many of my blogs, this was born out of a conversation with a friend of mine, which lead to some really good thoughts about the Gospel that I wanted to share in my blog. My friend and I were discussing Populism and its susceptibility to being radicalized yesterday, which lead to this thought my friend typed:

Interesting I just thought of this….you deal more in absolutes when it comes to social issues like equality or social justice. But religiously you’re far less absolute. I’m the reverse.

It’s not that I’m not for those social issues, I just don’t see them as urgent as you. That’s why when you talk about racial injustice and your problems with it – I point out 250 blacks killed by cops in 2016 in a nation with over 750,000 law enforcement. In principle it might as well be 25,000 for you, where as the statistical perspective matters to me.

Of course the stats matter, but  1) The size of the black community, a mere 13% of total US population (and 1 in 3 black men facing jail time in their lives), absolutely matters and is part of the data, and 2) The issue of systemic racism within the justice system, directly influenced white supremacy and the history of criminalizing blacks, especially the 13th Amendment, is about much more than A. The amount of cops vs B. The amount of blacks killed by cops. It isn’t just about that: there’s unjust sentencing laws, racial profiling, laws that target blacks and minorities, white privilege, which results in unfair advantages and less harsh sentences for whites, policies and procedures that target minorities, the war on drugs, which was purposely set up to target minorities, economic hardships, gentrification, and poor politics.

The recognition of the racial prejudice and inequality of the justice system is NOT just about how many cops there are vs. how many blacks are killed. Secondly, I’ve never denied absolutes or such. It’s just that my absolutes don’t necessarily align with my friend’s absolutes, and ULTIMATELY (for emphasis) my absolutes about social justice and equality stem directly from my religious convictions and the Gospel.

There is no other grounding, for me, for those absolutes. They are absolutely and thoroughly biblical, which for me makes them absolutely absolute. For me, Christianity is more about reconciliation/restoration/restorative justice, which is the core of those absolutes, than it is about legality and judicial sin, proselytizing, etc. hence why I firmly and absolutely believe we’ll see more folks who aren’t Christians in this life in the “life after ‘life after death,'” than we will those who do. Hence why those issues are absolutely urgent in the coming of the Kingdom of God and the work of Christ through us.

The Gospel is a social justice Gospel that speaks truth to power, humbles the mighty, exalts the weak, frees the imprisoned, heals the sick, stands for the oppressed, topples Empires, fights the political elites and their injustice, gives sight to the blind, causes the lame to walk, the deaf to hear, the mute to speak, the oppressor to seek forgiveness, the oppressed to forgive, the lost to be found, the hurting to be consoled, the hungry to be fed, the naked to be clothed, the wrongs to be made right, the last to be first, the broken to be mended, the widow to be cared for, the poor to be dignified and cared for, the lonely to be befriended, the broken-hearted to be made new, the tired to be given strength, the marginalized to be recognized, the forgotten to be remembered, the sinner to be glorified, that tramples down death by death bestowing life upon those in the tombs by the faithfulness of Christ, and the liberation from sin, death, and Hades.

This is the Gospel and anyone, Christ-follower/believer or not, who does these things, commanded from God through the Prophets and shown through the Incarnation of God Himself and His ministry here, is acting in Christ with Christ and through Christ in this world. This is the basis of my convictions concerning social justice issues because this is for me the prophetic imagination and reality of what it means to know Christ for to know Him, see Him, hear Him, and find Him is to be with and for all those listed above, brother. I can’t get more absolute than that. As St. John Chrysostom said, ““If you cannot find Christ in the beggar at the church door, you will not find Him in the chalice.” 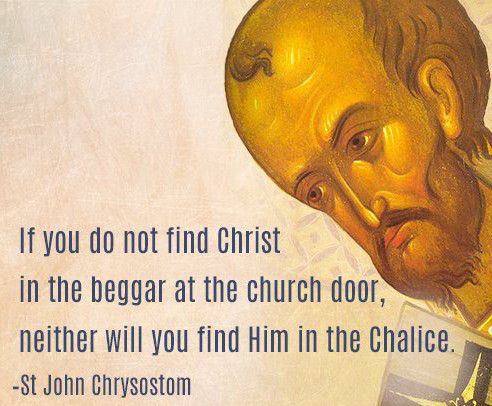 “He stood up to read, and the scroll of the prophet Isaiah was given to him. He unrolled the scroll and found the place where it was written:
‘The Spirit of the Lord is upon me,
because he has anointed me
to bring good news to the poor.
He has sent me to proclaim release to the captives
and recovery of sight to the blind,
to let the oppressed go free,
to proclaim the year of the Lord’s favor.'”